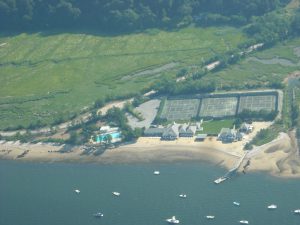 Nestled against the northern border of Huntington, Long Island, spilling across a half-mile-wide tidal inlet to the wooded headland of Lloyd Neck, and overlooking Cold Spring Harbor, Long Island Sound, and Huntington Bay, the Village of Lloyd Harbor was, in the early 1930’s, filled with trees, rolling slopes and gracious homes.

The village was totally residential and the homeowners generally people of well-to-do means who had survived the stock market crash and were re-establishing business and banking in New York City. Lloyd Harbor was a refuge and a retreat, a tranquil place to bring up the children and to spend the summer at leisure.

The Neck itself had only recently been opened to mainland traffic. A causeway had been constructed by Mr. William J. Matheisen to unite his main property on Fort Hill with West Neck and the beach property he owned there. The causeway was built with the excavation debris of the Manhattan subway construction which was brought out in large barges. Prior to that the Neck was accessible only by boat from Oyster Bay across the harbor.

At the foot of the causeway the Matheisens built a beach house with attached dressing rooms for use by the family and their friends. A central “living room” opened to the beach through shutter doors. Twelve foot square men’s and women’s sun pens (unroofed areas enclosed by a ten foot wall) were located at each end of the living room and a row of enclosed dressing rooms angled from each pen toward the waters of Cold Spring Harbor, some 80 feet away at high tide.

In 1934, Mr. Matheisen bequeathed his estate to his daughter, Mrs. Willis D. Woods. Mrs. Wood (Nan) made the beach and the facility available to the community of Lloyd Harbor, in addition to the family. The Woods invited their friends to use the facility and frequent visitors came to have their own dressing rooms. As the usage grew, more rooms were added.

The idea of a beach club began to develop under Nan Wood’s leadership. Several families banded together to form the core group of charter members and backers, and they incorporated. As voting club members, they elected a Board of Governors and extended invitations to other families in the area to participate in the club on a yearly renewable basis as seasonal members. These members, although non-voting, could enjoy the facilities, the bathing and the parties. To make it all possible, Mrs. Wood, in the first of many generous gestures, leased her beach and beach house to the newly formed club for a dollar a year. The club was named the Bath Club after the exclusive club in Miami which the Woods visited each year. (This club also featured sun pens for total tanning.) And so on June 11, 1936, after only about six weeks of planning and organization, the Lloyd Neck Bath Club was incorporated in the State of New York, “For the purpose of a social recreational club of limited membership providing those customary social and recreational facilities for its members and their guests which are or may be normally associated with a beach club located in a residential area.”

The club began operations with a Board of 7 members, 16 charter members and 87 seasonal member families. Then began the process of forming the practices, policies, and goals that would guide and shape “The Bath Club” until this day.